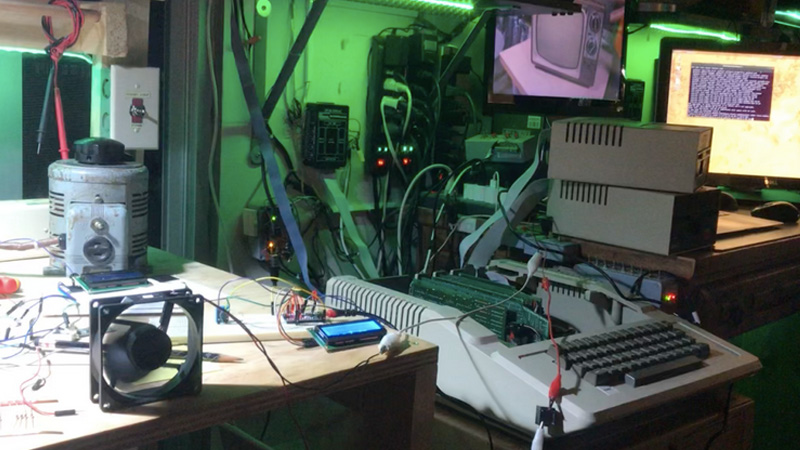 In its day, the Apple II computer didn’t typically require active cooling. However, the increasing scarcity of replacement hardware convinced [Joshua Coleman] to come up with a more robust active cooling solution for his Apple II+, increasing the likelihood that it will keep on crunching numbers for decades to come.

Joshua mentions that he recorded temperatures inside his Apple II+ peaking at 110 Fahrenheit (over 43 Celsius). This isn’t totally unexpected for a fully-loaded Apple II system, and components were built to handle this – the original datasheet for the 6500 microprocessor family reveals that the CPU can handle temperatures as high as 158 Fahrenheit (70 Celsius). Unfortunately, we’re not dealing with brand new components anymore. Decades-old microprocessors don’t necessarily have the same thermal tolerance as they once did. All components will eventually wear out, and heat can certainly accelerate the aging process.

In the interests of maintaining his system, Joshua cobbled together an Arduino-based cooling system for his Apple II+. A temperature/humidity sensor continuously monitors the heat situation inside the case – when things get too toasty, a 12V fan powers up to draw fresh air over the logic board and expansion cards. A simple cooling curve reduces wear on the fan motor and relay.

This is hardly the first active cooling system for the Apple II line – in the 1980s, Kensington produced a popular (if not stupendously ugly) ‘System Saver’ accessory, an external bolt-on fan that kept things running cool. These were often deployed in schools and by power users looking for added reliability when maxing out the Apple II expansion slots, a configuration that could increase temperatures due to the extra power requirements and reduced airflow.

NIST Visitor and Contractor Protocols for...