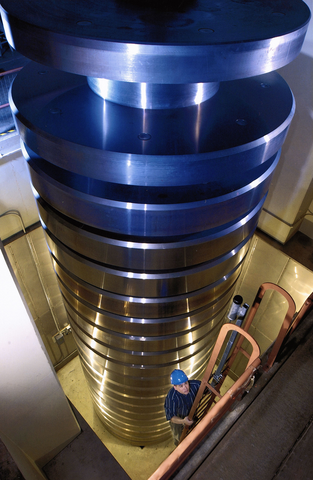 Mechanical engineers at the National Institute of Standards and Technology (NIST) have just finished calibrating several dozen large metal masses, which will be used to build a pair of unique force-producing machines currently being custom-built for the U.S. Air Force. The new Air Force machines will be about three times better than what they have now, though with larger uncertainties than NIST’s primary standards. They will support achieving peak performance of military aircraft that are the most advanced in the world.

When fully assembled, the devices – called deadweight machines – will consist of stacks of cylindrical masses, each between 500 and 8,000 pounds in weight. The deadweight machines will be used to calibrate force measurement devices, equipment that can be used to measure things like the thrust of a rocket engine or the weight of an aircraft before and after fueling.

“There are similar deadweight machines in the world but, truthfully, not all that many,” Chesnutwood said. “So any time one goes online, it is noteworthy.”

The Air Force’s deadweight devices are manufactured by Morehous ..